A paper I presented last year at the University of Kent and the University of St Andrews has recently been published in Brill’s journal, Biblical Interpretation. It is entitled, “Cognitive Perspectives on Early Christology,” and here is the abstract:

Central to all christological models are concepts of agency, identity, and divinity, but few scholars have directly addressed these frameworks within their ancient West Asian contexts. Rather, the proclivity has been to retroject modern, Eurocentric, and binary frameworks onto the ancient texts, resulting in christological models that inevitably reflect modern orthodoxies and ontological categories. The future of christological research will depend on moving beyond this tendentiousness. In an effort to begin this process, this paper will apply findings from the cognitive sciences – which examine the way the human brain structures its perception of the world around it – to the reconstruction of ancient frameworks of agency, identity, and divinity. Applying these findings to early Jewish literature reveals the intuitive conceptualization of God’s agency, reified as the divine name, as a communicable vehicle of divine presence and authority. These observations support the conclusion that early Jewish conceptualizations of divine agency provided a conceptual template for the development of early christology.

If you have an opportunity to read the paper, I’d love to hear your thoughts.

I am very pleased to have just been informed that my proposal for the Mind, Society, and Religion in the Biblical World unit of SBL’s 2017 annual meeting was accepted. My paper, which draws heavily from my dissertation, is entitled “Cognitive Perspectives on Divine Agency in the Hebrew Bible.” The abstract is below.

This paper will apply insights and methodologies from the cognitive science of religion to the study of the conceptualization of deity and divine agency in the Hebrew Bible, and particularly to the problem of the conflation of YHWH’s identity with that of the messenger of YHWH in a small number of early biblical narratives (e.g., Gen 16:7–13; Exod 3:2–6; Judg 6:11–23). The first part of the paper will argue that this conflation is a vestige of the early interpolation of the word mal’ak, “messenger,” in narratives where the deity’s interaction with humanity was considered theologically problematic. The second part of the paper focuses on the accommodation of that vestige within later biblical narratives and the cognitive mechanisms that facilitated it. More specifically, it will consider the influence of humanity’s cognitive predispositions to agency detection, teleology, and mind/body dualism on the development of mental as well as material representations of deity and divine agency in ancient Israel and Judah. Among other things, it will suggest the divine name, YHWH, functioned as a communicable vehicle for divine agency, the possession of which divinized the possessor and endowed them with the agency and authority of the God of Israel. The clearest expression of this ideology is found in Exod 23:20–21. The implications of this framework for the broader study of ancient Near Eastern instantiations of the material mediation of the divine will also be discussed.

I’ve presented related research on this topic before at SBL, but in the textual criticism of the Hebrew Bible unit. Another proposal on the development of YHWH’s invisibility and incorporeality (see my previous blog post) was booted from the system because student members may only present one paper per meeting. While the accepted paper will help me refine some ideas central to my dissertation, I really would have enjoyed writing the other one, too.

The preliminary schedule for June’s St Andrews Symposium for Biblical and Early Christian Studies, entitled “Son of God: Divine Sonship in Jewish and Christian Antiquity,” has been released to participants. It’s going to be quite a packed event. Three parallel sessions with three or four different groups of four papers each are scattered across the three days between the plenary sessions. My own paper will be presented last in group A of session 3, which begins at 2:20 PM on Tuesday in College Hall. See below for the schedule. 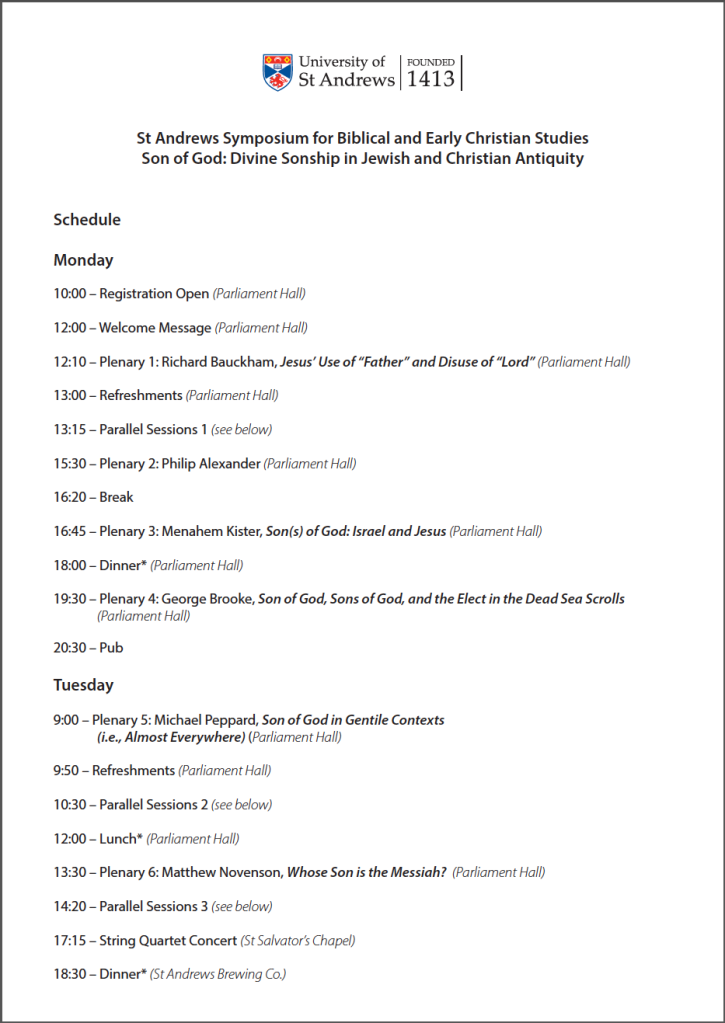 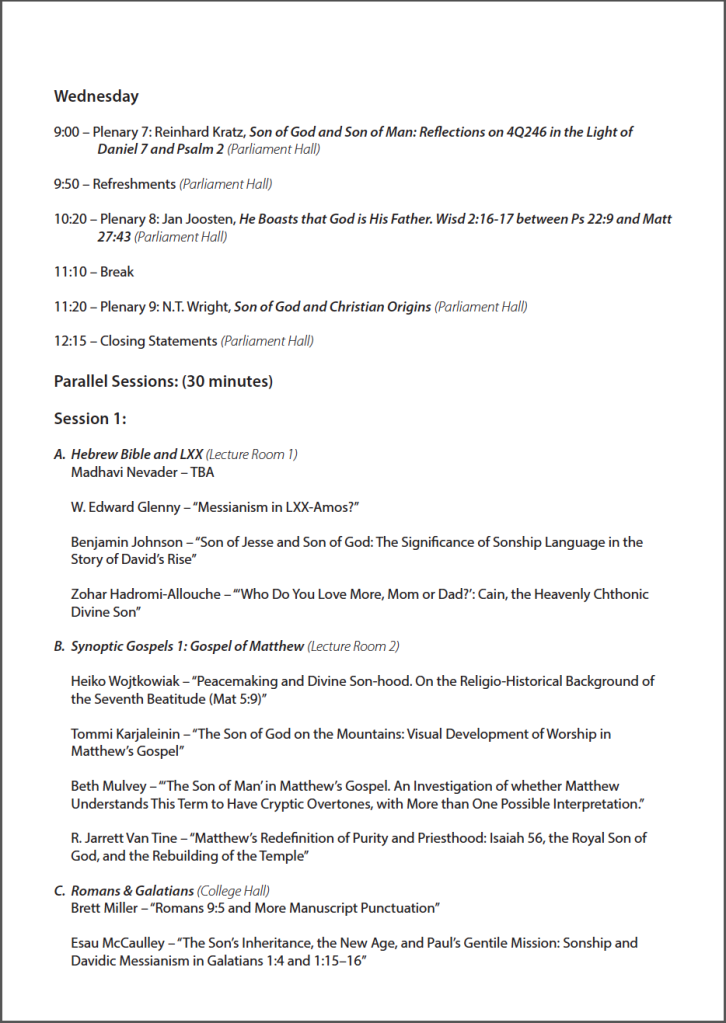 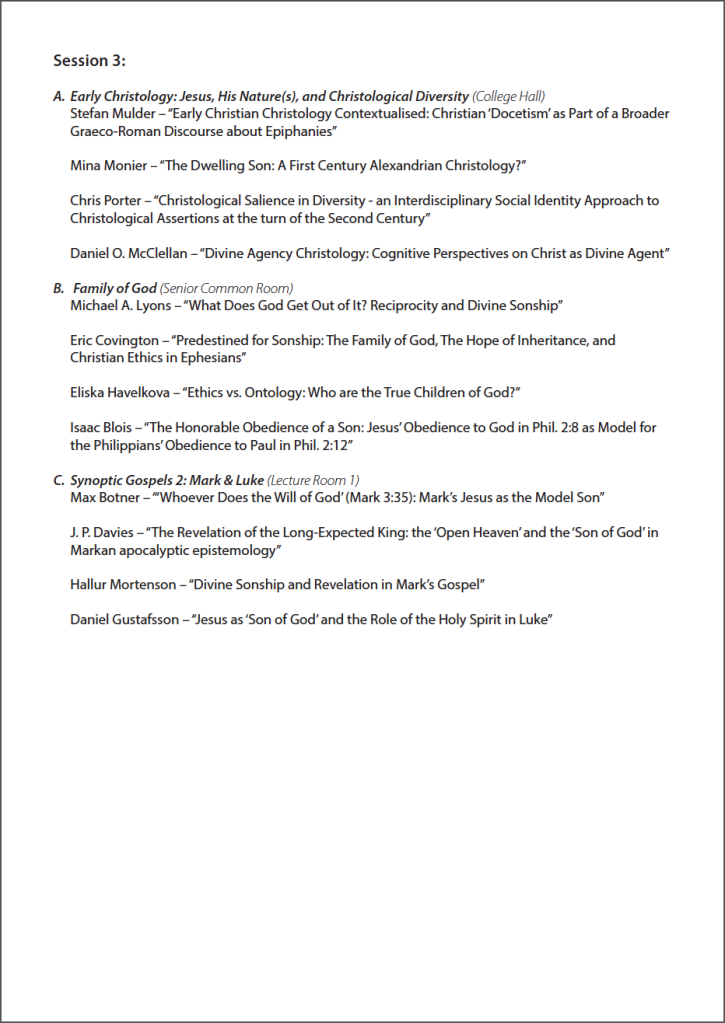 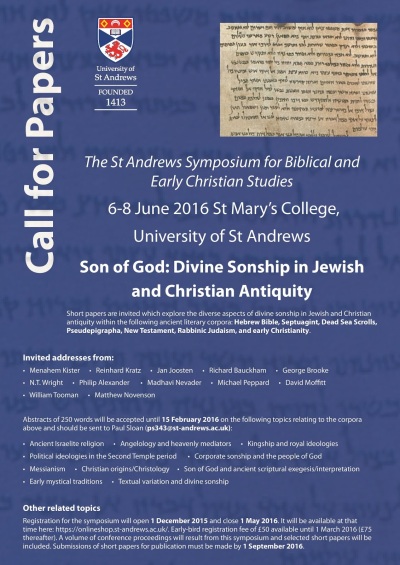 I just received word that my paper proposal for the St Andrews Symposium for Biblical and Early Christian Studies has been accepted (abstract below). This year’s symposium is entitled “Son of God: Divine Sonship in Jewish and Christian Antiquity,” and it includes invited addresses from scholars like Jan Joosten, Richard Bauckham, N.T. Wright, Philip Alexander, and others. it should be an exciting two days (in addition to the days I’ll be golfing). If you would like to attend, you can find registration info here.

Concepts of divinity, identity, and agency are central to all christological models, but few scholars have directly addressed these concepts within their ancient West Asian contexts. Rather, the inclination has been to retroject modern, Eurocentric, and binary frameworks onto the ancient texts. With such frameworks governing the reconstruction of ancient conceptualizations of divine agency and identity, the resulting christological models inevitably reflect modern Western Christian orthodoxies and/or ontological categories.

The proposed paper seeks to avoid this tendentiousness by applying a cognitive framework to the reconstruction of ancient conceptualizations of divinity, identity, and agency. Identifying evolved and innate cognitive architecture can help facilitate a more critical and methodological reconstruction of those concepts. Among other things, the study of human cognition reveals a marked absence of the binary conceptual categories that characterize the philosophically based christological models that have predominated from the Nicene era to today. Within cultures not heavily influenced by a sophisticated philosophical ontology, identity is predicated upon social roles and functions. As a result, that identity, and associated notions of agency, are conceptualized as quite fluid and even communicable.

Applying these frameworks to the analysis of divine agents in early Jewish literature reveals a number of functional and conceptual parallels to the christological descriptions in the Christian scriptures. The proposed paper will argue that early Jewish conceptualizations of divine agency provided a conceptual template for early christological developments, which were later assimilated to philosophical models developed in the second century CE and later.

The Cult Statue Is and Is Not the Deity 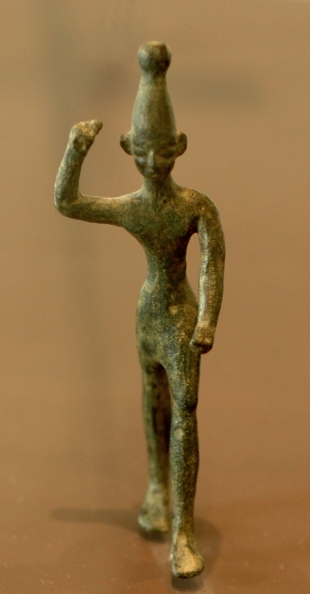 The contradiction of is and is not in the matter of the cult statue is so flagrant and cuts so deep that there must seem to be little hope of resolving it unless one goes to the most basic levels of understanding and attempts to gain clarity about the very fundamentals of ancient thought, about what exactly “being” and “nonbeing” meant to the ancients. We must consider, if only briefly, the ontology of the ancients, their ideas of what constituted “being” and “reality,” their criteria for judgment of true and false.

While it’s certainly true that one must retreat to the ancients’ fundamental conceptualizations of their identity and the world around them, I would suggest that framing it as ontology and “being” v. “nonbeing” is imposing contemporary categories precisely where we’re trying to see beyond them (I would suggest Bauckham commits the same presentism when he defines “identity” for his “Divine Identity” christology according to what we understand “identity” to entail today). In the ancient world, the concern was not so much for ontology as for social role and function. This draws less firm boundaries than we’re used to and makes it possible for the statue to both “be” and “not be” the deity, at least insofar as we understand “being” and “nonbeing.”

Michael Kok has a great article up on Bible and Interpretation entitled “Critical Questions for the Early High Christology Club” that discusses some of the main ideas that have been promulgated in recent years related to the development of high christology and invites a discussion of the strengths and weaknesses of those ideas. I’ve submitted a comment that should be up shortly. If you’re interested in the topic, join the discussion.

I received word earlier today that my application to the University of Exeter’s PhD in Theology and Religion has been successful, and I start in September. It’s a distance program, so I will stay in my new home and keep my wonderful job. My advisors will be Francesca Stavrakopoulou and Siam Bhayro, and the title of the dissertation I proposed is “Divine Agency in Early Israelite and Jewish Literature and Cult.” If you’re interested in reading the proposal, you can find it here. The program will be funded thanks to a generous offer from BYU’s Religious Studies Dissertation Grant Program. I’m very excited to begin doctoral studies after so many unsuccessful attempts, and I greatly appreciate all the help and counsel I’ve received along the way from so many out there. Thank you!

“My Name is In Him”: The Messenger of YHWH and Distributed Agency in the Hebrew Bible and the Ancient Near East

This paper examines the nature and function of the Hebrew Bible’s “messenger of YHWH,” focusing particularly on the blending of the messenger’s identity with that of YHWH. It will argue that the earliest appearances of the messenger in the biblical narratives arise from the textual interpolation of the word malak in the interest of obscuring YHWH’s physical presence and activity among the Israelites. These interpolations will be shown to have predated other narrative traditions within the Hebrew Bible, but as a result of cognitive mechanisms related to the conceptualization of divine agency and its communicability that had long been in place within Israelite and Assyro-Babylonian cult practices, later authors were equipped to seamlessly adopt the notion of the mediation of a semi-autonomous divine agent who could speak and act in the very name of the God of Israel. This distributable divine agency would become conceptualized in one influential iteration as YHWH’s “name,” which could indwell architecture as well as anthropomorphic agents,  extending the deity’s presence well beyond the conceptual confines of earlier tradition and cult. The implications of this understanding of the Israelite conceptualization of divine agency are far reaching.

I am making my recently defended master’s thesis available in PDF format at this link. The title and an abbreviated abstract are below.

“You Will Be Like the Gods”: The Conceptualization of Deity in the Hebrew Bible in Cognitive Perspective

This thesis has two primary goals: (1) to analyze the contours and extent of the generic category of deity in the Hebrew Bible, and (2) to propose a semantic base for the term. It begins with a description of the fields associated with cognitive theory, and particularly cognitive linguistics. Chapter 2 examines the cognitive origins of notions of deity and discusses how this heritage is reflected within the biblical texts. The third chapter examines the conceptualization of Israel’s prototypical deity, YHWH, beginning from the earliest divine profiles detectable within the text. In Chapter 4 the discussion returns to the generic notion of deity, highlighting references within the biblical text to deities other than YHWH. The conclusion synthesizes the different sections of the thesis, sketching the origins and development of the Hebrew Bible’s representation of both prototypical and non-prototypical notions of deity. Implications for further research are then briefly discussed.

While writing my thesis on  biblical conceptualizations of deity in cognitive perspective, a very helpful article was Beate Pongratz-Leisten‘s article from Reconsidering Revolutionary Monotheism (her introduction to the volume is here), entitled “Divine Agency and Astralization of Gods in Ancient Mesopotamia.” I believe her discussion of divine agency, which incorporates some insights from cognitive theory, is particularly relevant to biblical notions of deity and to christology (you’ll notice if you’ve read Peppard’s look at the christology of Mark that they develop some of the same approaches to the notion of the divine). I highlight this paper now because Pongratz-Leisten has made a draft of her article available on academia.edu. If you’re interested in the topic, you should definitely give it a read.