Thoughts on the Jordan Lead Codices

There’s still a lot of confusion and misinformation circulating about the Jordan lead codices, and I thought I would summarize some of the main issues and some considerations that should be taken into account. I’m not going to describe the background of the plates’ putative discovery and early life, but you can find much of that background, and commentary, at the following links:

Now, as many of the scholars above point out, several aspects of these codices beg skepticism. The  stories regarding their discovery differ in critical areas. The descriptions of the hoard differ. The codices are written in “secret code.” The codices’ main protagonist is shortly publishing a book about them and doesn’t seem to have any real credentials in the fields in which he claims specialization (and he calls the last book of the New Testament “the book of Revelations”). The most significant issue with the codices is described in an email exchange circulated recently by a young Oxford scholar named Peter Thonemann (available here). In that email, Thonemann explains that late last year Elkington sent photos of a copper codex with Greek writing on it to him for analysis. Thonemann quickly discovered a link between the codex’s inscription and a Greek/Aramaic tombstone inscription on display in a museum in Jordan (and published in two places). The copper codex, however, conflates the lambda and the alpha in the majuscule script, indicating the person writing it didn’t recognize the small difference between the two. The second and fourth letters on the third line of the following text (from left to right) are majuscule lambdas and alphas, respectively. While the difference is pretty clear, in some hands it’s barely perceptible, especially in inscriptions on stone:

Now on to the copper codex:

This reads ΛΛΥΠΕΧΛΙΡΕΛΒΓΛΡΟΚΛΙΕΙΣΙΩΝ and then ΛΛΥΠΕ written backwards. Another plate has the following at the bottom:

This contains the following portion of the other inscription: ΛΥΠΕΧΛΙΡΕΛΒΓ. The inscription Thonemann points to reads thus, with the words written in minuscule script and separated by spaces:

1 For Selaman, excellent and
2 harmless man, farewell! Abgar, also known as Eision,
3 son of Monoathos, for his excellent son, this tomb,
4 he constructed, in the third year of the province

Now here is the same inscription with portions from the first and then second inscriptions above bracketed:

The bracketed portions make no sense out of the context of the rest of the inscription. It seems the person responsible for the copper plate copied the entire second line off the inscription and then used portions of it on other plates. This indicates the copper codices are modern forgeries.

Now take a look at some of the photos from the BBC set:

Now look at the star patterns under the palm tree in the copper codex:

Now look at the stars around the Menorah on some of the first photos released: 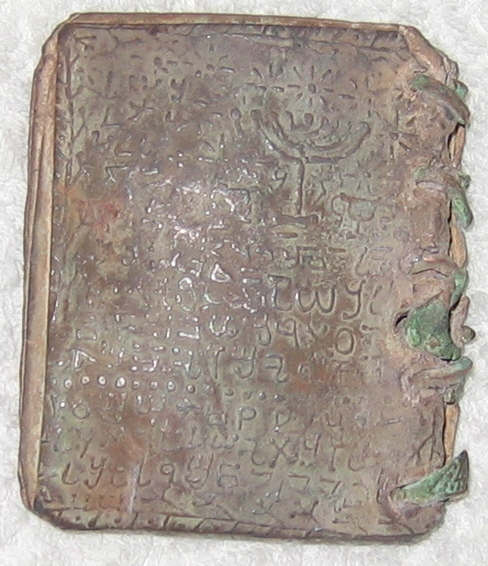 You can see both phenomena, as well as the stylized paleo-Hebrew on the forged copper plate and on the bigger plate: 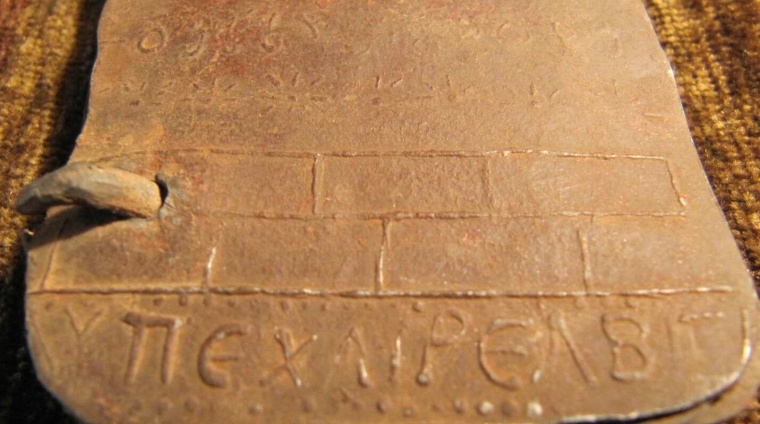 The above also shows the codices were cast. The two-and-a-half registers on this plate are identical in every detail. The same set of images was pressed into clay three different times for a mold. The bottom half of the top register has been smoothed out to allow for the register below, showing it wasn’t stamped.

The dotted borders and their teardrop shaped adornments on this forged plate are also remarkably similar to the same phenomena on the “Jesus portrait” codex: 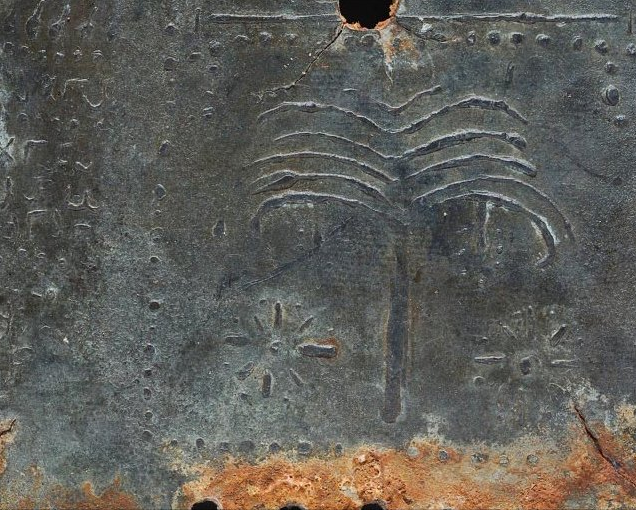 Notice also the same cryptic script, which looks like stylized, and sometimes reversed, paleo-Hebrew (see here for a brief judgment by an expert). The casting looks identical too. Bill Hamblin has also shown the Jesus portrait on this plate is strikingly similar to the image on ancient Helios coins. The copper plate also seems to have an impression of an old Alexander the Great coin with the lion headdress, which Hamblin discusses. These plates are all the work of the same hand, and the copper plate shows that that hand is the hand of a forger.

Some have posited that it’s still possible that some plates are authentic. Perhaps the copper plate was simply copied from authentic ones. While it’s certainly not totally outside the realm of possibility, a number of considerations mitigate the plausibility. First, it strains credulity to think that someone with authentic ancient codices would decide to go through the time and effort of producing fake ones to supplement the hoard, and then only publicize the fake codices. Second, we’ve seen no indication any plates have different origins. The notion that any are original is nothing more than wishful thinking. David Elkington’s credibility has been severely undermined by the fact that he hasn’t come froward on his own about Thonemann’s find, and is sharing photos of other codices that are clearly related to the copper ones. His story also changes with each new article.

Additionally, he is omitting from the publicity photos those qualities which pointed to forgery for Thonemann. No Greek writing is being shown. In fact, few of the photos show any kind of writing at all, unlike the earlier photos, and those that do show a much, much more cryptic script, perhaps intended to avoid the kind of embarrassing incident that happened with Thonemann? The changes in the collection also seem to indicate someone altered the plates after Thonemann’s analysis. Is Elkington in on the forgery? He doesn’t appear to be an innocent middleman who believes the codices to be authentic. He didn’t raise a stink when Thonemann told him his copper codex was bogus. Does Elkington stand to profit from the plates? Elkington doesn’t want to sell them, and is playing up that point. If he tried to sell them they could very easily be discovered as fake. However, he does have a book that may soon come out. He’s apparently been trying unsuccessfully to find a publisher. What better publicity could he produce by throwing the media a bone like this? if he’s just trying to sell books, the codices never have to see the light of day. In fact, the more intrigue and mystery he can produce, the more books he can sell. Is it a coincidence that we’re suddenly being told by the Telegraph that he’s been shot at by some Indiana Jones-like brotherhood trying to protect the codices from the world.

In light of these considerations, the burden of proof must lie exclusively with those who wish to assert any of these plates are authentic, and until some scientific analysis can show anything ancient is connected with these plates, I see no reason to give the question of their authenticity a second glance.

UPDATE: A gallery of all the photos released of the lead codices can be found here.

This entry was posted on Sunday, April 3rd, 2011 at 8:55 pm and tagged with Bronze Codices, Copper Codices, David Elkington, Jordan Codices, Lead Codices, Peter Thonemann and posted in Uncategorized. You can follow any responses to this entry through the RSS 2.0 feed.
« On the Lead vs. Copper Codices
Sunday Times Article on the Codices by Peter Thonemann »

30 responses to “Thoughts on the Jordan Lead Codices”